Handing a win to the Chicago Teachers Union, Gov. J.B. Pritzker on Tuesday is expected to sign into law a measure that will allow fully vaccinated teachers and other school employees to take COVID-19 related paid time off without burning up sick days.

Pritzker vetoed a similar version of the bill shortly after the January standoff between the CTU and Chicago Public Schools, saying then that he needed revised language to ensure the agreement would only apply to vaccinated employees.

The compromise bill that passed the Legislature last week will also return COVID-19 related sick days to vaccinated employees who had to use them earlier in the school year.

The governor’s office has been supportive of the revised measure, but spokeswoman Jordan Abudayyeh declined to discuss whether Pritzker would sign it.

But sources told the Chicago Sun-Times the governor is planning to give his official OK to the measure Tuesday at a bill-signing ceremony.Once the bill is signed, the law is effective immediately.

Gov. J.B. Pritzker signs a bill at the James R. Thompson Center in August of 2021.

It applies to all fully vaccinated employees of Illinois public school districts, universities and community colleges. The paid administrative leave will also apply to employees who have children who are required to stay home from school for COVID-19-related reasons, and it provides wage protections for all hourly school employees such as janitors or bus drivers who must miss school during a school closure or e-learning day.

The Illinois Education Association, which worked with the Illinois Federation of Teachers on the compromise, said some of its support staff and teachers have exhausted their sick and personal days because of the pandemic and have been using unpaid time off to quarantine or for other COVID-related reasons.

“We have educators who saved their sick time to take after the birth of a child, who have since run out of days and are forced with a very difficult decision — to take unpaid time off or to cut precious bonding time with their newborn short and return to work early,” Illinois Education Association president Kathi Griffin told the Sun-Times in a statement. 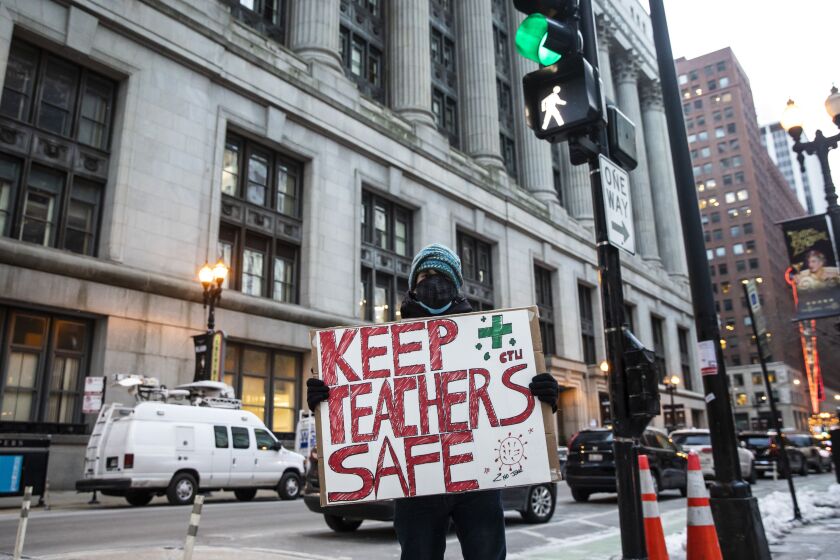 Adan Meza, 29, a teacher at Benito Juarez High School, poses for a photo as he protests with other members of the Chicago Teachers Union outside City Hall in January.

In addition to the teachers’ unions, the measure is also supported by the International Brotherhood of Teamsters and the AFL-CIO.

CPS was among the opponents of the initial measure, fearing it would strain school districts already dealing with staff shortages. But on Monday, CPS officials said they appreciated the compromise bill “as it gives further incentive for school employees to be vaccinated.”

The CTU walkout in January stemmed from disagreements with the city about coronavirus testing and when to close schools amid a COVID-19 surge. The two sides came to an agreement of sorts after five missed school days.

For best protection against #monkeypox, make sure to get both doses of the vaccine. Learn more about the vaccine and find locations where you can go to receive it: https://bit.ly/3Bd7Wpb.

Influenza-like illness, defined medical visits for fever and cough or sore throat, is high or very high in 35 states, according to CDC’s #FluView report. #Flu is a significant contributor to respiratory illness, but other viruses are spreading too. More: https://www.cdc.gov/flu/weekly/index.htm

Exposure to secondhand smoke, even for a short time, can be harmful to both children and adults. Secondhand smoke can cause cancer in people who have never smoked. Learn more: https://bit.ly/2SosXVZ
#LungCancerAwarenessMonth

Today, HHS announced it will adopt the @WHO’s new preferred term “mpox” instead of monkeypox disease and will use it from now on to avoid stigma around the disease and further promote access to quality care.
https://bit.ly/3VmbpuI

CDC invites you to follow @CareersatCDC on Twitter. Careers at CDC is your source for CDC career announcements, resources, and events for nearly all career fields.
#ExploreCareersAtCDC #CareersAtCDC