Richard Boykin, candidate for Cook County Board President and former Cook County Commissioner for the 1st District, unveiled his Public Safety Plan for Cook County on Thursday April 21, 2022 to address the escalating crime rates across the County.

The press conference was held outside the now-unoccupied, dilapidated block of flats where Boykin was born and raised in the Chicago neighborhood of Englewood–too often cited as amongst the most dangerous in the city.

“We have seen some of the highest levels of carjacking with almost two thousand cases in just the last 12 months. Last year, over 1,000 homicides occurred in the County and 81% of those victims were African-American (African-Americans only occupy 26% of the County’s population). Another 15% of those victims were Latinos, our Brown brothers and sisters.,” Boykin said giving a vivid and unflinching assessment of the worsening state of public safety in Cook County. 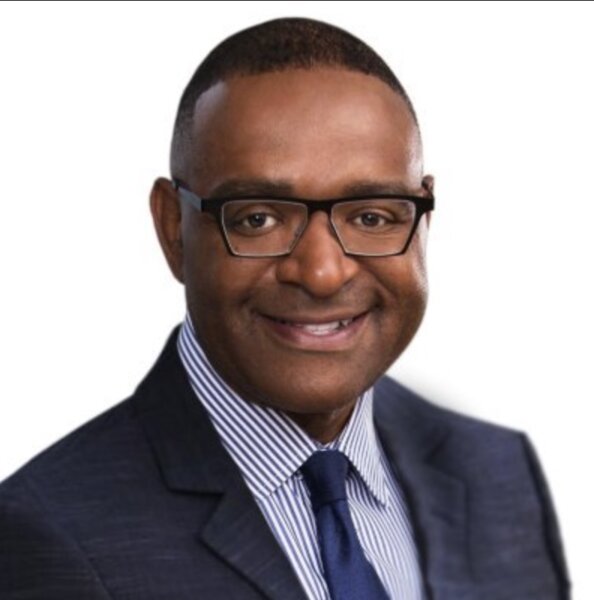 “This is, of course, not just an old narrative, but is a rapidly worsening narrative, and it is time for us to write a new narrative, one developed by research, community engagement, close collaboration with all stakeholders–and importantly, political will. Government has failed at every level to protect our communities.  Make no mistake this is an escalating public safety crisis and the plan introduced today makes urgent intervention and thoughtful prevention all the more important.”

“There is a 30 year life expectancy gap between someone in Englewood and someone in Streeterville. Just down the block. That should not be,” Boykin added in his  impassioned speech.

“I want my mother who lives here on the South Side to be able to sit on her porch in the evening and feel safe.”

Clerk Brown Cook, who had advocated for introducing wraparound services when she served as part of the County’s public safety stakeholders alongside President Preckwinkle, further said, “I am particularly encouraged by this Safety Plan’s emphasis on providing thoughtful and proven preventative, deterrence, technology and interdiction methods that we need to ensure meaningful change in public safety.”

Boykin was also flanked by friends, supporters and community members–a significant number of whom individuals who had tragically lost loved ones to gun violence.

One such individual, a mother who had lost her son to gun violence in 2019, said. “While we are grateful to have a community of other mothers who can relate to the tragedy of losing a child, we also do not want this community to grow any further–or even have existed at all in the first place. We thank Attorney Richard Boykin for having a real plan at a very real time.”

Boykin’s plan provides both a sobering assessment of the worrying state of public safety across Cook County as well as a programmatic explanation of the measures needed to be undertaken to make our communities safer.

Among the measures proposed by the safety plan include:

Hanania also writes about Middle East issues for the Arab News, and The Arab Daily News criticizing government policies in the Israeli-Palestinian conflict.

Hanania was named “Best Ethnic American Columnist” by the New America Media in November 2007, and is the 2009 recipient of the SPJ National Sigma Delta Chi Award for column writing.

Eswatini once had the highest rates of #HIV & Tuberculosis (TB) worldwide. Today, it’s one of the 1st countries to reach HIV epidemic control & shows dramatic reductions in TB cases & deaths, thanks to swift interventions by @CDCgov, @PEPFAR, & partners! https://bit.ly/3cQ2qAy

The sooner a person exposed to monkeypox can get vaccinated, the better the outcome. Receiving a monkeypox vaccine within 4 days of being exposed to the virus can provide the best chance of preventing the disease. Learn more: https://bit.ly/3AftSRE.

Understanding disparities in #COVID19 vax rates and intentions to get vaccinated in the U.S. workforce is important to achieving health equity. Read #PublicHealthReports study identifying gaps in employee vaccination & strategies to close them: https://bit.ly/3aHS6Jx.

Wash or scrub #fruits and #vegetables under running water – even if you don’t plan to eat the peel. Germs on the peel or skin can get inside fruits and vegetables when you cut them. 🍉 🥒 🍋
Learn more: https://bit.ly/2GSy3rO

National Immunization Awareness Month is here! Is your baby up to date with their routine vaccinations and well visits? Talk to your doctor today! https://bit.ly/3JD4LLf

What Financing Planning is and is not