The pandemic has hurt our mental health. The CDC reports a significant rise in the number of people reporting symptoms of anxiety and depression nationwide, but COVID-19’s effects on mental health are perhaps most profound in young people.

Psychiatrists in North Carolina agree the youth mental health crisis is the latest wave of the pandemic.

At the end of last year — and nearly two years into the pandemic — U.S. Surgeon General Dr. Vivek H. Murthy declared the country had a youth mental health crisis. Dr. Gary Maslow, a child psychiatrist at Duke University, agreed, but it hit home for him a few months later.

“In March, I was rounding in the hospital — I’ve been at Duke for a decade — and never experienced the number of children or young adults coming in with serious suicide attempts,” Maslow said. “What we might see in three months or a year we saw in a week.”

The CDC’s most recent numbers show the pandemic’s early effects on young Americans. In 2020, the overall suicide rate declined, but it was up among people between the ages of 10 and 34.

And for every teen who died by suicide that year, more than 200 others attempted it.

Meanwhile, the share of high school students who reported persistent feelings of sadness or hopelessness was already rising significantly in early 2020.

Maslow and other doctors agree the disruptions of COVID-19 exacerbated that trend. That was especially true for the most vulnerable children.

“The kids who have developmental conditions like autism or an intellectual disability, when they were in school, had a whole matrix of support. And the loss of that was profound,” Maslow said.

Then, young people’s parents or guardians started dying from COVID-19. A report published by the COVID Collaborative said by the end of last year, more than 3,600 children in North Carolina had lost caregivers in the pandemic.

“Then they have depression or they have anxiety, and some of the natural supports that might buffer that are missing,” Maslow said.

Dr. Samantha Meltzer-Brody walks and talks with urgency. As the chair of the Department of Psychiatry at UNC-Chapel Hill, she works at the center of campus, surrounded by UNC’s expansive system of hospitals and clinics.

“I have lost all patience for talking about it,” Meltzer-Brody said shortly after sitting down in her office. “There is a crisis and we need to spring into action.”

“You try to find a mental health clinician, but you can’t find one, because they’re all booked. Our emergency departments are now filled with patients with mental health conditions, who haven’t been able to get care, and they’re going to the emergency room sort of in crisis,” she explains. 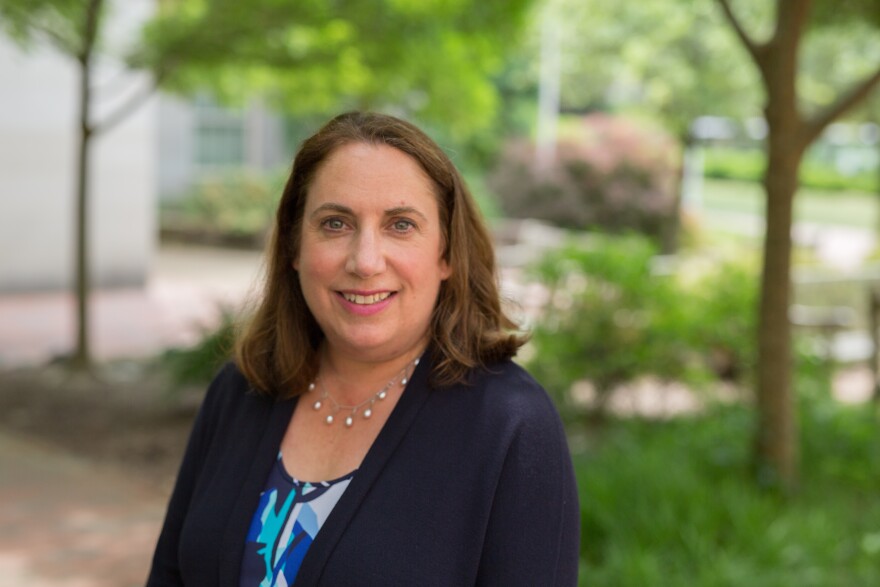 Dr. Samantha Meltzer-Brody, chair of the Department of Psychiatry at UNC-Chapel Hill

“And there’s not sufficient places to take care of them, including those that need inpatient beds.”

Then there’s the discrepancy in how much is spent on mental versus physical health care. In general, insurance companies don’t cover behavioral health as robustly as primary care.

“It’s really hard to parse out the health of children out of the context of the health of their families,” said Kody Kinsley, secretary of the North Carolina Department of Health and Human Services.

CDC studies show children often suffer both mentally and physically if their parents do, too, especially if they don’t have health insurance.

Kinsley’s position is appointed by Gov. Roy Cooper, whose administrations have pushed for North Carolina to expand Medicaid under the Affordable Care Act, a move that would cover about half a million North Carolinians who don’t have insurance.

“And nominally most of those expansion beneficiaries would be adults,” Kinsley said. “Yet, we know in the way that cost shifting works in the health system, and how money flows into different, hospitals and providers, it’s going to go beyond just the beneficiaries themselves.”

Republican leaders in the North Carolina legislature were historically opposed to Medicaid expansion until this year. Senate president Phil Berger told WUNC in September he supports it, but remains concerned about its rollout.

“We’ve got to find a way to increase the capacity of the health care system to treat people if we expect 500,000 to 600,000 people with an insurance card that are going to be in the system,” Berger said.

There are state laws that control where, when and how many beds health care providers can add to their systems. It would be up to the legislature to ease those regulations.

“The thing that keeps me up at night is that we can identify that someone needs something, and then we can’t get them what they need,” said Dr. Gary Maslow, the child psychiatrist at Duke.

Maslow says expanding Medicaid and adding psychiatric beds would be just part of an effective overhaul; that there have to be more ways to intervene before a child attempts suicide and comes to the Emergency Department.

“If I have a kid in clinic, I’ve diagnosed this kid with depression, and they’re not going to commit suicide today, what they could really benefit from is like a two- or three-week day treatment program,” Maslow explained. “That doesn’t exist. We just don’t have it.”

Maslow is also in a constant fight against the stigma of mental illness, both as a physician and a parent.

“Our job is to be present for them, to try to communicate that we care about them, to communicate hope, and communicate safety,” he said. “… That idea of getting to a quiet space and saying, ‘what do you need?’

If you, your child, or anyone you know is experiencing a mental health crisis, dial 988 for the national Suicide and Crisis Lifeline.

Clinicians: Do you prescribe #PrEP in your practice? A new lit review explores the potential of using electronic communication tools to increase awareness and uptake of PrEP among Black and Hispanic/Latino people. Learn more: https://bit.ly/3Xb4Efk #HealthLiteracy

Are you concerned about exposure to per- and polyfluoroalkyl substances (PFAS)? The PFAS Multi-site Study (#PFASmss) is a national, collaborative effort aimed to better understand health effects of PFAS exposure. Find out if there’s a study site near you: http://bit.ly/3ARGaPG

The 2023 U.S. #TB Elimination Champions recognize those who have adapted to a changing public health landscape and remain committed to TB elimination.

Looking for a #COVID19 test but not sure where to go? CDC's COVID-19 Testing Locator website can help. Search for a no-cost COVID-19 testing site: http://testinglocator.cdc.gov

Frequent Blood Pressure Monitoring Is Needed During and After Pregnancy

Tracking the opioid crisis: Inside the DEA’s secret lab

The Medicine Is a Miracle, but Only if You Can Afford It